Who’s involved with the Sports Media LGBT+ network group? We’ll be looking to introduce you to some of our members over the coming weeks and months, and learn more about their roles in the industry.

First up, Jon Holmes from Sky Sports Digital explains more about the background to the network and why he was keen to set up a group..

I’ve been Home Page Editor at Sky Sports Digital based in west London since 2014, managing our platforms and leading our team of sub-editors. Prior to this, I was working as a football journalist and sub-editor at our old editorial hub in Leeds. 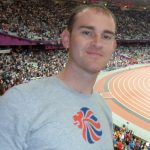 Over the course of the last 12 months, I’ve had the opportunity to write in depth about LGBT inclusion in sport for Sky Sports, as part of our involvement in the TeamPride coalition of organisations supporting Stonewall’s Rainbow Laces campaign. Through that work, I’ve been fortunate to connect with others in my industry who are also LGBT, but commonly that has purely been through social media or email. I felt having an established network group would have been of significant professional benefit to me and, I believe, those in similar roles.

I’m also a member of the Sports Journalists’ Association, and was encouraged to see in their last annual report that “expanding our work in diversity” was among the list of SJA targets. Four women now sit on the SJA committee, which is actively encouraging more female representation in our industry. Support was pledged for the English Federation of Disability Sport’s study into the media representation of disabled people in sport. The SJA has also forged a close relationship with The Black Collective of Media in Sport (BCOMS) in seeking to address various diversity issues. “There is much more work to be done,” noted SJA chairman Andy Elliott in the annual report.

Results of City University’s wider study of British journalism were released last year and showed the industry to be 94% white and 55% male, with 0.4% of British journalists Muslim and 0.2% black. BCOMS’ research, released in October 2016, focused on key sports journalism roles across print and broadcast in summer of that year – the gender split was approximately 80-20, while only 1.75% of all roles were filled by black journalists who had not played sport professionally. Data on the representation of disabled people in sports journalism is not available, but the EFDS study did note “particular concern… about the lack of disabled journalists within the media.”

It was therefore in the wider spirit of diversity that I began to look into the possibilities of starting up an LGBT+ network for those working in sports media, and those who aspire to join the industry. Our community’s representation in this sphere is understandably less ‘visible’ than those of other minority groups, but with homophobia, biphobia and transphobia still disappointingly prevalent in sport as a whole – if not, we hope, so prevalent within sports media – there is an opportunity to help foster inclusion and emphasise the importance of team spirit in tackling any challenges that may arise. Organisations, employers, senior leaders, editors, reporters – we all need to share in the vision of increasing representation to bring about change.

The SJA kindly allowed me to expand on my initial vision for the Sports Media LGBT+ network group in a recent blog post. I mentioned some scenarios where we would seek to assist colleagues:

[The network] would… be there for anyone in the industry seeking help – the freelancer trying to find the right terminology, the columnist covering transgender athletes for the first time, the journalist who’s feeling isolated at work, the ally concerned about a potentially strong headline, the ‘out’ editor who wants to bounce some ideas around… none of these are rare scenarios.

I’ve been fortunate to have the co-operation of several fellow sports editors, journalists, media officers, communication managers and others who have supported my efforts. Thus far, we’ve established the following objectives…

So the warm-up exercises are all done – it’s now time for action. Connect with us by dropping an email to info@sportsmedialgbt.com, or a DM etc on Twitter at @SportsMediaLGBT, or tweet me at @jonboy79.