The Stonewall campaign for LGBT inclusion in sport is currently receiving its annual activation, which runs into early December. We can all help to make sport everyone’s game – Jon Holmes explains how our Sports Media LGBT+ network is here to assist you…

The colour provided by the Rainbow Laces campaign is back this month to brighten up British sport.

The 17 November to 7 December 2018 activation period is the sixth organised annually by the charity Stonewall. It’s an opportunity for athletes, coaches, administrators, officials, fans, the media – everyone – to be visible about their support for inclusion in sport for people who are lesbian, gay, bisexual and transgender.

We know there are long-standing barriers to participation and representation in sport for LGBT people and while it’s an improving picture, there’s still a great deal for us all to achieve. Homophobic, biphobic and transphobic language and behaviour affects us all, not just those who are lesbian, gay, bi or trans; there are the lingering effects of outdated stereotypes, perceptions, and assumptions; and many of those who are LGBT don’t feel they can share that part of their identity openly, out of fear of discrimination. Meanwhile, sport’s global influence means the campaign can also help raise awareness around the world. As of September 2018, there are still 73 out of 195 countries (37.4%) where same-sex love is illegal. In addition, Russia and Lithuania have anti-LGBT ‘propaganda’ laws, while very few countries adequately protect their trans citizens from discrimination. 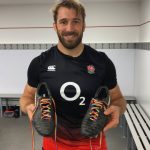 Last year, Rainbow Laces was bigger than ever before. The FA, Premier League, EFL, Premiership Rugby, and the British Olympic Association were just a few of the governing bodies and organisations to publicly back the campaign and famous names in sport such as Jurgen Klopp, Sir Chris Hoy, Chris Robshaw (pictured right), Casey Stoney, Steph Houghton and Adam Peaty wore laces. Hundreds of people took to social media to post pictures and videos, or just to comment on the campaign, such as comedian and Arsenal fan Matt Lucas (below). In April, Stonewall and TeamPride – the consortium of businesses and brands that give top-level support to Rainbow Laces – won the Campaign of the Year gong at the BT Sport Industry Awards.

As an LGBTQ football fan it is really heartening to see Rainbow Laces support from so many players and clubs this weekend. Thank you to all involved. ?️‍?⚽️

Rainbow Laces is about much more than just the physical laces. The visibility they provide makes it a simple way to show you’re helping to ‘make sport everyone’s game’, but not everyone can actually wear them (case in point – a lot of modern football boots don’t even have laces). That’s why the rainbow motif is now often used in other creative ways – corner flags, pin badges, social media logos, advertising hoardings, TV spots, and many more.

Underpinning all these rainbows is the campaign message – that everyone deserves to feel safe and supported in sport, because they can then be the best versions of themselves and achieve more. It’s something our network explored in our recent #AuthenticMe event at the BBC in Salford. Our special guests Tom Bosworth and Charlie Martin explained that they couldn’t have achieved their objectives and enjoyed the journey if they had to hide a part of their identity (check out Charlie showing off her laces during Pride Month in June in the Instagram video below).

Tom says he walks faster because he no longer has that worry of a ‘secret’ at the back of his mind. Charlie says she drives faster because she’s able to focus fully on the track, not on the gender dysphoria she once felt off it. Thousands of people have been able to identify strongly with stories like Tom’s and Charlie’s, and many more have listened and acknowledged what they are saying because they themselves have friends and family who are LGBT. Stonewall’s Rainbow Laces Summit at Wembley Stadium in September also explored how different sports are all at different stages on their inclusion journeys.

Last year, I was fortunate to get the opportunity to talk to the referee Ryan Atkin about his experiences of being a gay man in professional football. Ryan’s story reminded us that this particular part of sport is still a very difficult environment in which to stand out from the crowd, to be different. For Rainbow Laces 2017, he told Sky News that he shared his story because he wanted to help change people’s preconceptions about being gay in football…

I truly believe that education is the catalyst – when you change your mind, you will change the game. I can now be me, within the beautiful game. Will you help others be themselves too?

Ryan’s question is one that all of us can take a little time to consider as Rainbow Laces rolls around again for 2018. Do you have a story that could inspire someone else? Maybe you’re LGBT yourself and have had an experience in sport – whether good or bad – that has had a big impact on your life. Maybe you’re not LGBT, but just through being an ally to someone who is, you’ve been able to bring about some sort of tangible change. At first, you might feel that your story would be seen as relatively inconsequential, or on a smaller scale to others you’ve read about previously in the papers or online. But everyone’s story matters – and by sharing them, we get the chance to empower others, and even be the inspiration that we needed when we were younger. 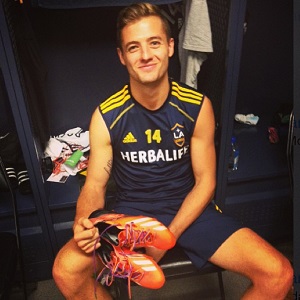 We also get to choose how we share our stories. Social media platforms and online publishing give us the chance to take charge of the narrative ourselves, like out LGBT athletes Tom Daley (12.5m views on YouTube) and Robbie Rogers both did a few years back. As these stories are usually – by their very nature – highly personal, being able to exercise a measure of control is important.

This can also be achieved by working with the media and taking advantage of their expertise and the extended reach of their platforms. We recognise the industry’s reputation in this area is somewhat chequered; for example, we’ve been particularly concerned this year by certain sensationalised tabloid front-page leads about unnamed gay and bi male footballers. But we also continue to see many hugely powerful examples of good practice on the front and back pages of newspapers, in the digital space, and on screen. The aforementioned Tom Bosworth chose to speak to the BBC when he came out publicly three years ago; Ryan Atkin chose Sky Sports because he was energised by the network’s support for Rainbow Laces; earlier this month, the Crystal Palace Ladies players Megen Lynch and Nikita Whinnett spoke to The Times about being team-mates, fiancees, and foster parents. Whether it’s the coming out story of a person whom sport has given a raised profile, or a story about the experiences of an individual or team at a grassroots level, the Rainbow Laces campaign will undoubtedly flourish further through the sharing of all these stories in a way that best suits those who are telling them. 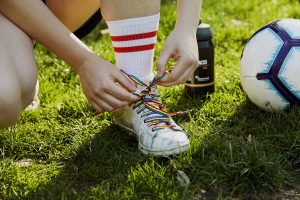 At Sports Media LGBT+, we want to help get these important stories told and ensure they reach their target audience. Our network members are experienced professionals from across the media spectrum and because we’re either LGBT+ ourselves or vocal allies, we’re also sensitive to the various nuances and the need for context on this particular subject.

In our first year, we’ve built a strong reputation in the industry for amplifying under-represented voices; challenging problematic media narratives; and providing and supporting spaces for those in sport and sports media to talk about being LGBT in a way that’s relevant and constructive.

We’d like to learn more about why the Rainbow Laces campaign matters to you, and how you can help activate it. When you see someone wearing the laces in their trainers, what signal does it send? When your football club changes its profile pic on social, what impact does that have? What kind of story would have made a difference to you when you were younger – and could you be the person to tell such a story now?

We’re showing our support for Rainbow Laces. If you’d like to connect with us and have a conversation about the campaign and how our sports media network can help you – whether you’re in sport, in media, in the LGBT space – please get in touch.

What did we learn from the Rainbow Laces Summit?