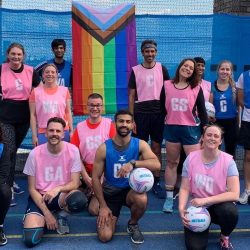 First round of Nike grants already having “huge impact” for seven projects in the capital supported by Out For Sport, which now has charitable status; Unicorns LGBTQIA+ Netball Club – about to celebrate their first anniversary – share success story and future plans; Out For Sport co-chair Vicki Carter says “we want to reach thousands more LGBTQ+ Londoners”