Sports Media LGBT+ was founded in 2017 as a network group for those in the industry who are LGBT, and for our allies. Click here to find out more. 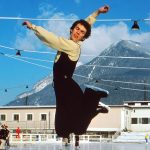 So said the American journalist John Vinocur in defence of his article which outed the figure skater John Curry just two days after his Olympic gold medal triumph at Innsbruck ’76.

Vinocur, filing copy for the Associated Press, had been interviewing a candid Curry over a series of days prior to the Briton’s balletic winning free skate in the final. When Curry won gold, the feature was rushed onto the wires and the skater’s sexuality became the headline. Vinocur stood by his scoop. “There was no expectation of copy approval… He seemed quite relieved if anything.”

The story of Curry’s success, and the talent and torment that he carried with him throughout his life, are the subject of a new documentary called The Ice King by James Erskine (who previously co-directed 2013’s tennis doc The Battle of the Sexes, which preceded last year’s drama of the same name). The Ice King‘s British release is as perfectly timed as a Curry triple axel, arriving after worldwide interest in US skater Adam Rippon, competing at the 2018 Winter Olympics as an openly gay man, and during the UK’s own LGBT History Month.

“Whatever greatness you think I have, there are demons of equal value that are inside of my soul” – John Curry, sports pioneer, tormented talent. His artistry shines through in new doc @theicekingmovie #TheIceKingMovie #TheIceKing #LGBTHM18 @JJERSKINE ⛸? https://t.co/SjyvH8UeyX

If the media clamour around Curry was loud in the mid-Seventies (news of both his gold medal and his subsequent ‘revelation’ made the newspaper front pages back home), Rippon has similarly generated copy which goes far beyond his athletic achievements of a bronze in the team event, and a 10th-place finish in the singles competition.

With an authentic personality as fierce as his competitive streak, Rippon has dextrously fielded questions from the media about representation and Republicans, and relished the spotlight on and off the ice. More than 40 years after the reporting of Curry’s career peak – both the glory and the gossip – it’s important to recognise the change in tone in the media coverage of gay sportsmen.

“This charming Olympian”, “he’s the winner of the Olympics”, “nine reasons why he’s America’s sweetheart” – just three headlines plucked from a Rippon search on Google News. Only in the murk of Breitbart and similarly skewed sites will you find the good name of Scranton’s new favourite son besmirched.

Despite what those outlets might say, it’s surely the case that Rippon’s ascending star will shine long after the memories of Pyeongchang have melted away (and even then, the complex marking system couldn’t detract from the joy of his final routine, set to an Ida Corr club anthem remix). A national sweetheart, and a media darling… a gay man at ease with himself in the most intense of sporting arenas, and the irrefutable feeling that owning his identity so publicly has raised his confidence and his performance level (video below from his competitive skate at the 2018 US Nationals).

Western media in particular have fed off the novelty of having Rippon, fellow skater Eric Radford of Canada and also US skier Gus Kenworthy as open, out male Winter Olympians. Lesbian and bi sportswomen were less prominent at these Games despite their medal hauls, not necessarily because they were less interesting, just that their backstories reflected a more inclusive environment and carried fewer signs of struggle.

As always, the US website Outsports gave thorough coverage of all athletes competing for ‘Team LGBTQ’, celebrating their achievements and commiserating over their misfortunes. “I’m as patriotic as they come,” said Outsports editor Cyd Zeigler, “but there’s one time that I actually cheer for somebody else, and that’s in these Winter Olympics… I find myself cheering for the out LGBTQ athletes over the Americans.” That same sense of community will resonate with many others who also strongly identify with out athletes, regardless of the countries they represent or the club teams they play for.

Writing in Vanity Fair, the Hollywood columnist and movie critic Richard Lawson summarised many gay men’s feeling of solidarity with Rippon by drawing a comparison with the current cinematic zeitgeist: “The effusive reaction to [him] shows how very important representation can be, just as Black Panther will when it arrives in movie theaters this week. It matters to a child – and to an adult – to, yes, see some reflection of themselves.”

The strongest hope will be that those in countries where LGBT rights are not as advanced as in the west, such as in South Korea itself, will be similarly inspired. What matters most is the wider message, and the media has a vital role to play in that aspect.

Following his Olympic success in 1976, Curry was the recipient of many subsequent honours, including one at the Sports Journalists’ Association‘s British Sports Awards towards the end of that year. Having arrived late to the ceremony, he made his way through the tables of guests to collect his gong, only for the comedian host to say: “It’s good to feel the Christmas spirit among us all – and here comes the fairy for the tree.”

In a Daily Mail serialisation of his 2014 book Alone: The Triumph and Tragedy of John Curry, upon which The Ice King documentary is based, Bill Jones wrote of how that moment affected the skating hero: “He received his award in near silence, heartbreak written on his face. It was, he later said, ‘one of the most hurtful incidents in my life.'” Fortunately, the British public at large were more respectful of Curry’s achievement and character, and voted him BBC Sports Personality of the Year only weeks later.

It’s a reminder of the damage that careless homophobic language can cause, even to a champion, and although it’s hard to imagine such an incident happening in public to a gay athlete today, it happens frequently on social media. Such discrimination needs to be called out more vociferously and reported, with pressure also put on the platforms themselves to combat those responsible.

If more sportsmen and women who happen to be LGBT are to trust journalists with that part of their individual identities, and by being open allow us to write fully about their life stories, there must first be clear signs of support. The UK media, particularly managing editors and senior leaders, need to show they are good allies by speaking more confidently and convincingly about the merits of LGBT inclusion across the sporting spectrum.

In doing so, we can ensure any future John Curry is left in no doubt that the whole media – not just sport – respects them for performance and as people. Homophobia and other forms of exclusion in sport are cold and cruel and they’re far from consigned to history, but we are now all moving forwards with momentum – our collective journalism standards must not slip and let the side down.

For more on The Ice King, Cathy Newman’s interview with director James Erskine and John Curry’s former boyfriend Heinz Wirz for Channel 4 News is well worth a watch. The film is in UK cinemas now.